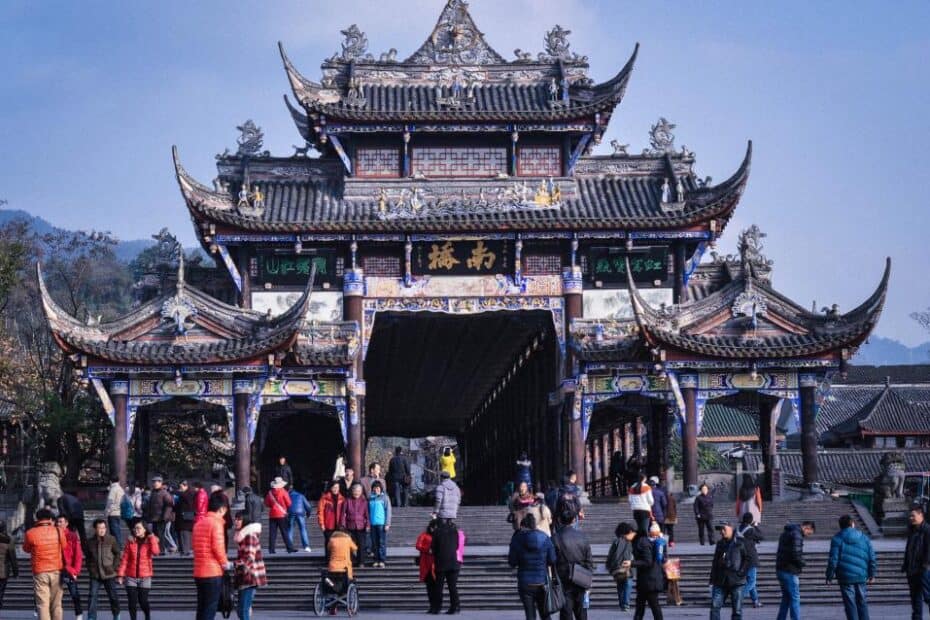 Ancient Chinese architecture has a distinct style with distinctive elements, ranging from the siheyuan courtyards in the north to the stilted bamboo homes in the south; from the palaces with gorgeous roofs to the attractive gardens.

Here are the top seven characteristics of ancient Chinese construction.

Wood was the primary material employed in the construction of the majority of traditional Chinese architectural constructions due to technological and economic limitations.

Due to their wooden structure, the majority of surviving ancient buildings only go back as far as the Ming Dynasty (1368–1644). The Yingxian Wooden Pagoda, which was constructed in 1056, is the country’s oldest still-standing all-wood pagoda.

Residential structures with multiple stories were uncommon in ancient China. Most structures, from modest homes to palaces, were one story tall. The tulou (earth buildings) in Fujian were an exception. These modest castles were constructed to fend off pirate attacks and harassment.

Hotels and restaurants were also constructed on two stories.

Additionally, the only multi-story buildings in ancient China were typically pagodas, temples, or military fortifications like city walls.

Yellow was the color of emperors, hence the imperial palaces in the Forbidden City were only accessible to royalty.

Furthermore, the luckiest color in China is red, which may be seen in red-painted furniture and curving ceramic roof tiles.

A common hue for roof tiles was green, which stands for prosperity, growth, and harmony.

Ancient Chinese structures had a variety of architectural styles, including imperial palaces, temples, and houses. However, the majority of the plans adhered to the symmetrical rule: the primary structures would be situated along the north-south axis, and the auxiliary structures were often spread out along two of the sides in east-west pairs.

Chinese gardens abandoned symmetry in favor of a greater emphasis on conforming to nature. They have a tasteful blend of both man-made and natural scenery. Find out more about Chinese gardens.

The protected siheyuan courtyard was Beijing’s most climatically appropriate architectural design. Due to its enclosed design, the exterior walls are protected from dust storms that regularly occurred in North China in spring as well as frigid winds in the winter.

Moreover, people in Shaanxi carved up cave homes in the Loess Plateau’s soft-soiled rocks. The winters were warm and the summers were chilly in these cave shelters. For optimum illumination, they were facing south.

With its humid and hot climate, including the historic Longji Rice Terraces, South China’s raised bamboo huts offered a cool and dry place to live.

Most ancient Chinese architectural structures faced south for warmth and light because China lies in the Northern Hemisphere.

Fengshui principles constructed homes in the past when the Chinese people believed in geomancy; these rules were likely based on prior architectural experience. They offered a lot of useful advantages. Natural protection, defense, and beautiful landscape were frequently bonuses to southern outlooks.

Due to the continuity of the culture and the craftsmen’s devotion to style traditions, Chinese architecture has undergone extensive evolution over time but has maintained a high level of consistency.

Because of their continuous design, most ancient Chinese architectural constructions are difficult to date.

Most used materials in architecture

How to design a double-height living room?