If we look at the traditional wooden windows, we find that it was the best means of communication and the correct natural interaction between the members of the dwelling and between the community and the surrounding external environment, but on the other hand, we find that people have refrained from them to flock to be covered with curtains, they cannot open them because they reveal their nakedness, and thus understand the good Many, at the present time, the windows of many residential homes have lost control over the entry of sunlight into the house, and control the intensity of lighting while eliminating glare, as well as losing control of the direction and quantity of air movement inside the room, in contrast to the traditional roofing sheets, which allow all that. This is in addition to an edition that wooden windows allow women to look outside through the flaps without seeing from the outside, unlike the current windows, which reveal privacy because they do not contain any secret partitions, and the windows have become rectangular or square opening with two flaps of glazed aluminum and without Any beautiful details, while the main element that distinguishes the character and appearance of the dwelling is mostly the peasant women, in contrast to the wooden windows, which are integrated into form and function, which gives the facade of the possible beauty and elegance without the need to counterfeit and exaggerate the blocks surrounding the windows in pursuit of non-functional beautification.

In this research, the elements that make up the traditional wooden window were presented with an analysis of the pros and cons that it achieved in the current era, such as the impossibility of tight closure against spare parts and insects, and industrial air conditioning, as well as its high material cost, and the length of time required to implement it, which led to leaving People and their abandonment of it, especially after the lack of craftsmanship hands that mastered this work, with the wooden windows not entering the world of manufacturing.

The Definition of Wooden Windows “Roshan” 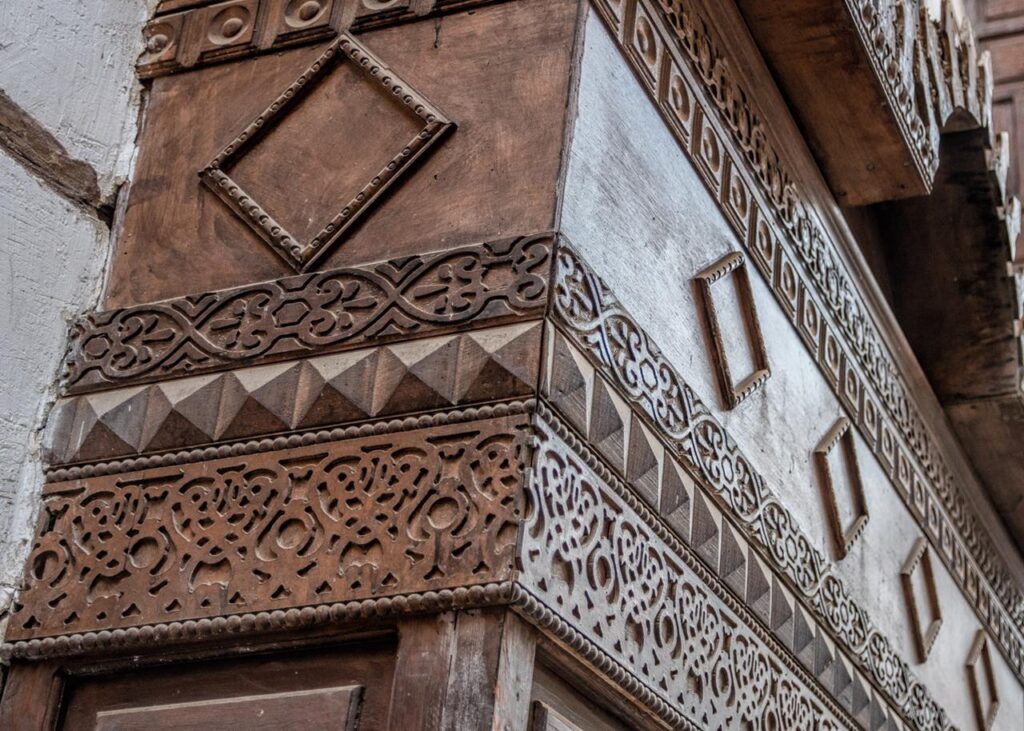 It was mentioned in the books that this word came as an Arabization of the Persian word Rozan, which means window or balcony. It is used to refer to the raised wooden panels that are used to cover the windows of the house and which bear the wonderful Arabic arts such as arabesque art. The sprays are also used to cool water, cool the atmosphere in the house, and prevent direct sunlight from reaching the house. It is also used to reduce dust and prevent dust and sand from entering the house. As well as insects and flying flies. It also protects against the rain that may damage a house made in such a way that heavy rain may cause damage.

In terms of use, the Roshan is a window to the outside world, a curtain extending the glowing sunlight, an integral part of the ventilation system in the house, a piece of furniture, and sometimes an extension of the room above the opposite street). The wooden windows are from the outside with protection and non-disclosure of the inside, using the flanges. In this way, it also ensures control of the viewing angle, the intensity of lighting, glare, air movement, and speed, and the wooden window openings are very flexible, as they are fully opened, or half-closed with the flaps open or completely closed, and these are only some of the advantages.

But there are still some negatives, such as the penetration of dust and insects, the lack of suitability for modern industrial air conditioning, and so on. Therefore, it was necessary to think of an appropriate solution that preserves the beauty of the shape, and does not lose the distinctive character of Roshan while eliminating the mentioned problems. 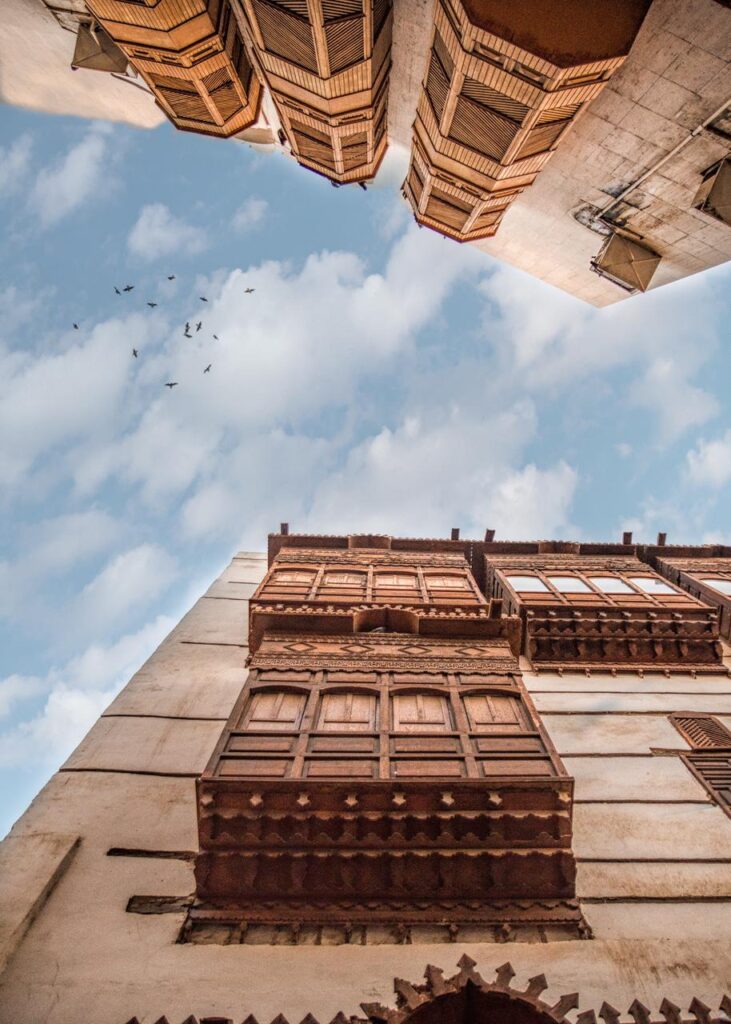 The sayings differed about the original source of the emergence of the Roshan, and some believe that the people of Roshan are from India and that the origin of the word is Indian: Roshanda An, meaning the source of light or the upper openings near the ceiling, and this word is made up of two words Darushani, which means light, and the second and Dan, meaning giver.

Which niche? And the niche is the burning in the wall and the hole in the house and the like.

The same applies to the origin of the word Mashrabiya. Drinking and evil, with openness and affliction, is the room. And in the hadith: that the Prophet, may God’s prayers and peace be upon him, was in his drinker, i.e. he was in a room, and he gathered them with bars and drinks, and it was said that it is like a bank in front of the room. It was impregnated in the high room. 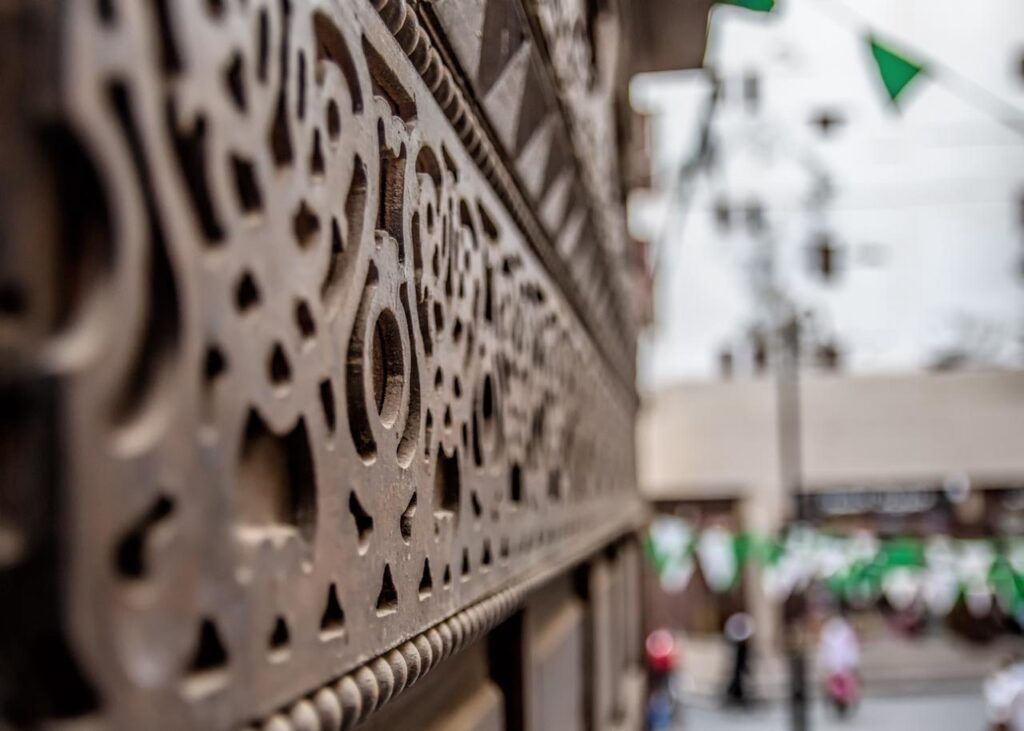 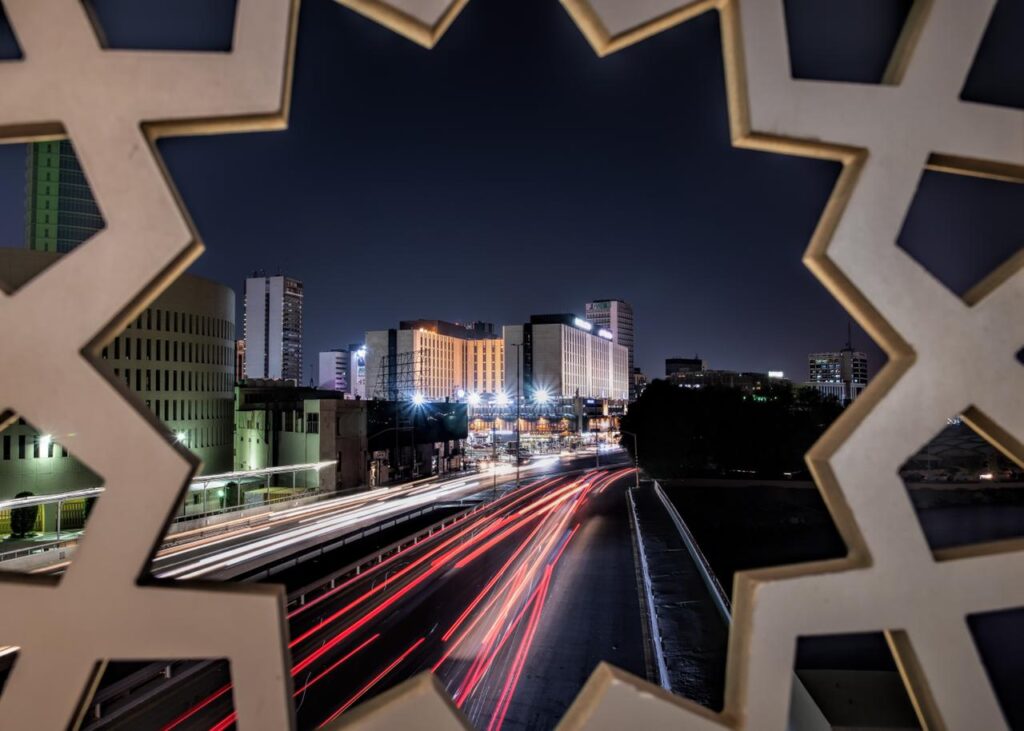 There is a shift from the stages of the formation of the wooden windows. While the old shape of the Roshan stems from its multiple uses, we find that the Roshan shape was limited to the general form only, and therefore it was easy for even the shape to lose its value as it became meaningless to its user or to the beholder. In the past few years, the Roshan has regained its artistic value as a very aesthetic and creative touch, as it has been used with modern and modern materials, other than the ones that were used in the past. Perhaps the most prominent changes that have occurred in Roshan are:

The twentieth century is the century that was dominated by absurdity and the loss of the traditional personality, and the isolation of generations from their heritage, as we are talking about the Rawashin, which is one of the heritage. He still stands with his view in front of the wooden windows, which was and still represents the originality of time and place of the ancient Hijazi architectural style in the city of Jeddah, the bride of the Red Sea, and it became one of the prominent architectural features in it, especially in the old neighborhoods, whose architecture blended with a mixture of Arab, Ottoman, and Persian cultures.

6- Khalil, Tharwat Metwally (2000 AD) Mashrabiya and Rawashin and their Impact on the Interior Space – Journal of Science and Arts, Helwan University, Cairo.

12- Al-Marham, Farida Mohsen Abdullah (1421 A.H.) Al-Roshan and Al-Shabbak and their impact on the interior design of the traditional houses of Mecca in the early fourteenth century AH – Master’s Thesis, Umm Al-Qura University, Mecca. 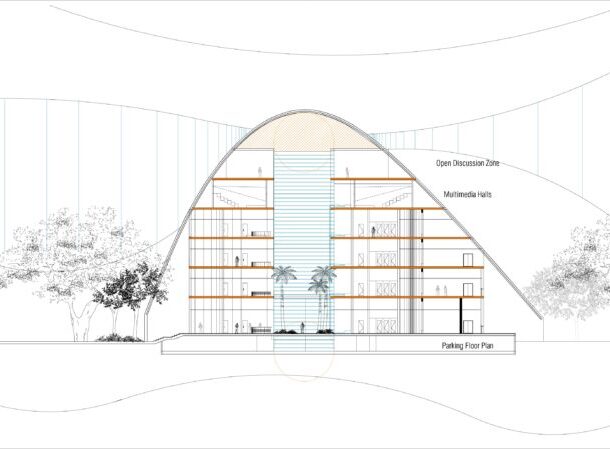 Architecture plays an important role in our lives
Next Article